You will find the only center for treating dystrophic patients and those with muscle diseases only in Novopazarska Banja Spa.

Treatments here are in hot spring water of up to 52 degrees Celsius.

In Novi Pazar, the following recommendation is used as payment for treatment – meet the most valuable monuments that have become a part of the narrowed down selection of world cultural property, under the protection of UNESCO: Stari Ras with Sopocani Monastery, foundation of King Uros Petrova Church, Durdevi stupovi, Gradina in Ras. 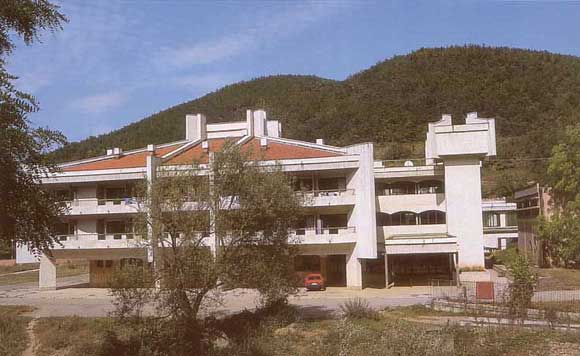 The waters from our Spa are known from the times of the Romans and the Turks.

Those who travelled to the east and west, who passed land and the sea, said:

We have never seen anywhere in the world such thermal spa.

One of them even made a chronogram:

This spa became paradise for those in love.

NATURE AND US: We are surrounded by the mountains of Golija and Rogozna, which are suitable for picnics and recreation. Our town, situated at the juction of the rivers Josanica and Raska; through which the important roads that connected Dubrovnik, Bosnia and south coast with Salonika and Constantinopole used to pass; was named Yeni Bazar – Novi Pazar by the Turks. Because of its size and significance, it was also called Seher, which was the epithet given to few towns in the Balkans.

NATURAL RESOURCES: the waters from our Spa are known from the times of the Romans and the Turks. Their chemical contents place them into the category of sulfuric mineral hypotherms. The temperature of our thermomineral waters; which are used for drinking and bathing; ranges between 12 and 52oC.

NOVI PAZAR IS ALSO RECOGNIZED BY: the Town Fortress with the Watch Tower from the 15th century, built by the order of the founder of the town, Isa-Bey Isakovic, as well as by his gift – Hammam (Turkish bath). There are also Altun-alem Mosque from the 16th century, the work of famous architect Muslihudin Abdulganije, and Amir-aga’s Inn (tavern) from the 17th century.

YOU MUST FIND TIME TO VISIT:
St. Peter’s Church (Petrova Crkva) is the oldest Slav sacral monument in the Balkans.
Djurdevi stupovi, an endowment by Stefan Nemanja, from the 12th century Sopocani Monastery, an endowment of King Uros I, from the 13th century
Along with Djurdevi Stupovi, St. Peter’s Church and Ras, as a whole, UNESCO placed Sopocani Monastery on the World Cultural Heritage List in 1979.