Two of God’s sacrifices; whose legend was popular among soldiers originating from Anatolia; were found in Stari Slankamen (old salty rock) and a series of other clues suggest that ancient Romans had their thermal bathhouses here, where „Pannonia maestro“ winds blow from the Danube.

Despot Stefan Lazarevic conquered Stari Slankamen in 1404, which was witnessed by the old Orthodox Church from that time, which was built by despot Vuk Grgurevic, known among the people as Zmaj Ognjeni (fiery dragon).

In the west part of Stari Slankamen, even in present day, water flows from Slanjaca Spring, which is 18 degrees warmer than the average annual temperature in this area.

Stari Slankamen is located in Southeast Srem, on the right shore of the Danube, on the east slopes of Fruska Gora, at 80 meters above sea level. 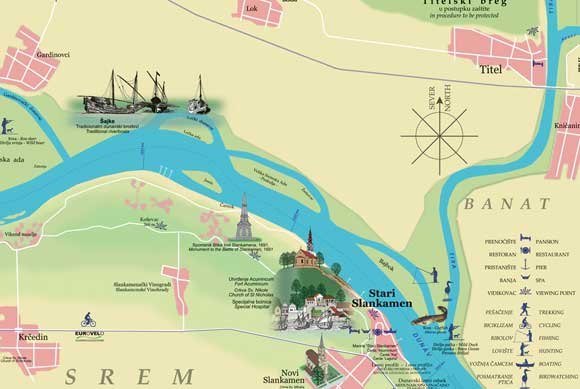 Archeologists were familiar with it from the prehistoric location Gradina, and in the time of the Celts and Romans, there existed a community called Acumincium.

It becomes significant again in the year 1906, and the modern development of the spa begins in 1964 with the construction of a new spa building and station.

The treatment is provided in the Special hospital for neurological diseases and post-rheumatic conditions „Dr. Borivoje Gnjatic“, specialized for treatment of hemiplegia with mineral water, at the temperature of 18.4°C, of salt-iodine sodium type that is not for oral use!

WHAT IS MEDICINAL IN OUR WATER: sodium-chloride, iodine, magnesium, calcium, strotium and barium.